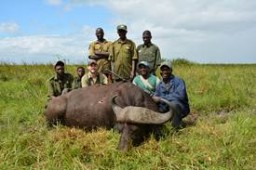 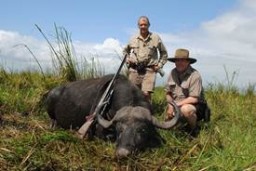 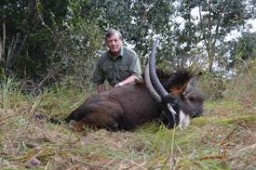 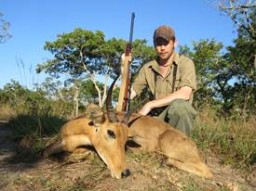 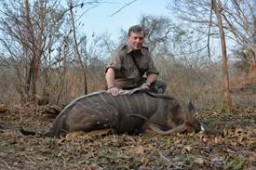 (Note to self: rip-stop battle dress trousers and Vietnam War era jungle boots. More about that in a bit.)

I wanted to send you a quick note and thank you and the team for again putting together a fabulous hunting experience.  Having hunted buffalo in the Caprivi (another great effort on your part), I wanted to give my son an opportunity to share that classic African experience – moreover, I am personally hooked on hunting those big black bulls.  Your suggestion to make Mozambique the destination for that hunt where free range Nyala and Sable were a possibility sealed the deal.

On 16 August, my son and I landed in Beira, Mozambique following the usual trek from the US. There we linked up with Grant and Abraham “Boet”  for a two-week hunt for cape buffalo and plains game. Grant was battling a bout of malaria, so Boet would be my PH (Boet is a tough old unreconstructed Rhodesian Selous Scout and so a perfect match for an old paratrooper like me). My son would be ably guided by Rigardt du Plessis – a young PH who joined Grant following Zambia’s closing.

Beira may not be the end of the world, but one does not have to get on a very high place to see it from there – assuming one could see through the town’s humid, charcoal smoke fed haze. Having spent three decades in the military banging around some of the world’s backwaters, I can say with some authority that coastal Mozambique will be struggling for a while to come. In many ways, it reflects the worst effects of both its colonial past and bush-war inspired Soviet socialism.

In any case, we were soon on the road to Muanza camp, which would be the center of operations for our stay. Following an excellent meal, and jet-lagged induced night’s sleep, we hit the road next morning for the Zambezi Delta and Tony’s camp in Coutada 14.  I had heard so much about hunting the Zambezi Delta marshes, I was thrilled to hear that would be our destination for our buffalo hunt. We rolled into camp around noon, and were shortly driving the edges of the vast marsh to get a feel for the following morning’s hunt.

As you well know,  the Delta is a vast area of saw and razor grass flats cut by papyrus lined sloughs which range from a few inches to several feet in depth. Where the ground is wet, and particularly around the sloughs, one pushes through the typical black gumbo mud one would find in the marshes in which I grew up in South Louisiana.  We headed out at dawn, and good light found us under the “buffalo tree” – a strategic lookout from which we might spot the herds. The trackers scrambled up the fifty foot tree onto branches which would have given a squirrel vertigo. Binos picked up the flicker of egrets about four kilometers out into the marsh. We had to cross an immediate channel where an aluminum skiff was stashed, but after that, dry boots were a memory. I wore shorts and Courtney boots – bad choice. Razor grass isn’t as obvious as acacia thorn, but is no less effective at slicing up ones’ hide. Add to that the rotten vegetation cocktail brew in which those cuts were marinating, and I was glad a day later that I had brought along a strong general purpose antibiotic.  A far better idea would have been rip-stop combat trousers tucked into the old Vietnam era jungle boots with the wire mesh drain holes.  We had a particularly nasty hole to cross as we finally closed with the herd.

As we carefully emerged on the other side we could hear the sounds of hundreds of animals drifting by less than fifty yards away. Unfortunately, we could not see them through the shoulder high grass. We backed out (through the channel again), looped the herd for several hundred yards, and struggled across the slough yet again. This time, as we emerged, we had a short-grass flat of several hundred meters into which one edge of the vast herd was just entering. The nearest animals were passing only 35 yards away with egrets milling for hundreds of yards into the distance indicating the actual size of the herd.

Getting my son a bull, was the first priority, and Boet and Rigardt quietly eased him onto the sticks as a cow stopped and watched use suspiciously. His target, a wide bull toward the rear of the group we could see, paused briefly quartering slightly toward us at about sixty yards. Boet quietly said “kill that bull now” and Staton perfectly placed a 300 gr Northfork from his Sauer just inside the shoulder which spun the bull around and anchored him. Buffalo were flying in all directions when an old bull halted about eighty yards away looking back at his wounded comrade. Boet nodded yes, and a quick LxR of 300 gr TSXs from my Blaser S2 dropped him. Staton put three more rounds into his bull from the rear, and finished him as he tottered around to face us again. The silence was almost stunning as we realized we had two magnificent trophies on the ground within one hundred yards of each other.

Handshakes, back pounding, and a lot of grins preceded the hard work of butchering the animals and carrying them out over the same terrain through which we stalked them.  One would have been hard pressed to find two happier and fithier hunters when we finally reached the trucks late in the afternoon.  We spent another comfortable evening and night in Tony’s camp reliving the day’s hunt and counting our blessings that we had been able to get both bulls from the same herd. The next morning our little caravan hit the road for Tatapu, Mupa, and eventually Muanza again where Mozambique’s unique plains game opportunities would keep us more than occupied for the remainder of our stay.

The hunt in the Zambezi Delta and Grant’s vast concessions was everything we had imagined it would be and much more. We had seen an unspoiled eco-system that is very unique in the world. We had successfully hunted its vast buffalo herds, and we had done it traditionally by walking to the birds. We had also pursued plains game in their native free-range habitat.  Finally, our equipment worked as we hoped it would, dropping two great trophies where they stood. We are counting on every view of the worn bosses of those two bulls to help us relive this great adventure for what I hope will be many years to come.  Thanks again Jack.