Jack Atcheson & Sons, Inc. was founded in Butte, Montana in 1955 by Jack Atcheson Sr. and his bride, Mary Claire. Jack Sr. ran a very successful taxidermy business, but also booked worldwide hunting trips for his clients. The post-war international hunting industry was in its infancy, and Jack Sr. coined the term “hunting consultant” to describe his occupation. Jack Atcheson & Sons, Inc. grew, and the Atcheson family grew as well. First born was Jack Jr, then brothers Keith and Brian, and finally a girl, Kristie.

The 1960’s brought unprecedented growth to the hunting industry. The hunting in North America expanded as species like Rocky Mountain Elk, Pronghorn Antelope, Bighorn Sheep, and Deer were being brought back from the brink of extinction by modern western wildlife management models. The herds were flourishing and business did as well. Each summer in the 1960’s, Jack Sr. and Mary Claire and the kids would head north in the family station wagon to visit hunting outfitters scattered across the western states, Canada, and Alaska, to promote the taxidermy and booking business. Young Jack Jr. and Keith grew up in the company of famous outfitters and their hunting territories, or “on the job training,” as Jack Sr. called it.

In the same period of time, overseas opportunities developed in Mongolia, Botswana, Zambia, and Mozambique, to compete with Kenya and, under a new name, Tanzania. With New Zealand, Australia, India, Nepal, Mexico, Iran, and South America all joining the scene, Jack Sr. joined with Zambia Safaris and helped hundreds of hunters enjoy this great new destination for a big game safari. Jack Sr. was deep in the middle of this very interesting industry with family in tow! He never actually outfitted hunts, but rather only organized hunts. Jack Sr. is a great champion of hunting and conservation. He was awarded the Aldo Leopold Award in 2000 and was also largely responsible for Montana’s famous Stream Access Law that guarantees fisherman access, and opened up over 5 million acres of state (public) land in Montana that was off limits for years. Jack Sr. retired in 2000 and continues to hunt, fish, and travel with Mary Claire.

Jack Jr. spent much of his youth in the hills of Montana hunting and fishing, as well as in the taxidermy shop. He started to work full-time with Jack Atcheson & Sons in 1971. Jack Jr. made his first true hunting trip to Alaska in 1970, Tanzania in 1971, British Columbia in 1972, and guided his first Bighorn Sheep hunter in Montana in 1975. Jack Jr. went on to outfit and guide sheep hunters in Montana’s rugged Absaroka Beartooth Wilderness Area, Deer and Antelope hunters in the Missouri River Breaks, and numerous other top U.S. Bighorn Sheep areas until retiring from outfitting in 2001.

Jack Jr. has visited Africa almost every year since 1971, enjoying both guided and self-guided safaris in most all of the African countries offering hunting opportunities.  Jack has hunted in six continents!  A wild sheep fan from an early age, he took the FNAWS (Four North American Wild Sheep) at just 23 years old. Jack Jr. and his wife, Cindy, were married in 1982. The couple chose, then communist, Mongolia, as the site of the honeymoon. Jack Jr. hunted Gobi Argali Sheep and Ibex, while Cindy wondered what she had got herself into. Cindy, now an avid hunter and fisherman, completed her FNAWS in 2012. Jack Jr. was chosen as a member of the first Sino-American Wildlife Survey of the Tibetan Plateau in China’s Qinghai Province in 1985, becoming one of the first Americans to visit the region since Kermit Roosevelt in the 1920’s.

The Russian Government invited Jack Jr. to explore Russia’s eastern extremes, to evaluate the business potential of hunting and fishing.  The six week tour covered an area the size of the continental U.S., covering Magadan, Chuktka, Kamchatka, Yakatia and Khabarovsk regions.  Work in this region continues to this day. Jack Jr. has made over 200 wild sheep hunts personally and, as an outfitter, taken many of the world’s wild sheep species.  More recently, Jack has been the National Wild Sheep Foundation Chairman (2011-2013), and is current Director for nine years of the same foundation.  He presently serves as the Chairman of Wild Sheep Foundation’s Conservation Committee which develops strategic direction in the foundation work for conservation.

Keith Atcheson joined the firm in the late 1970’s after attending the University of Montana in Missoula, Montana. He specializes in North American and African hunting opportunities, as well as New Zealand, Australia, South America, and Asia. He has been on over 50 African safaris and taken most of the Big 4 dangerous game several times over. Keith has taken six of the eight spiral-horned plains game, including Bongo and Sitatunga. He also has taken many North American wild sheep and has a FNAWS (Four North American Sheep). He plans to complete the North American 29 species as well.

In addition to over 30 years experience as an international big game hunter and hunting consultant, Keith has been outfitting and guiding hunters in Montana for 37 years. He guided his first client at the age of 16 to a successful bull elk hunt and, since that time, has fielded well over 1,000 hunters for Deer, Pronghorn Antelope, Black Bear, Elk, and Bighorn Sheep. Keith is married to Nicole Atcheson, and together they have five children, all who enjoy hunting. Keith’s son, Andrew, has recently joined the Atcheson team as well, and we look forward to his computer skills in this day of multimedia. 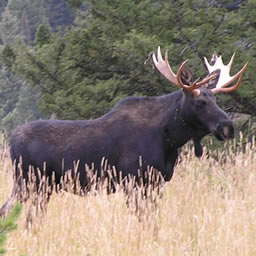 Atchesons have thousands upon thousands of references we'll gladly furnish.

Tips On How To Book A Hunt »