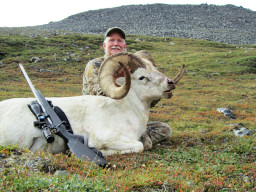 Just wanted to let you know that Mike and I had a great hunt with Jeff. He has a well-organized and well run operation. And I must say some of the hardest working guides I have hunted with. We saw a lot of rams but not many legal ones. I shot a beautiful 41 2/8 ram that Jeff scored at 167 4/8. It was much better than I had hoped for. Mike had a hard time finding a good ram but did get a nice full curl ram on the last day. Both of our guides worked very hard and were experienced hunters. This was one of my better hunts and not just because I shot a big ram. It does appear that Jeff may want to cut back on sheep hunters and let his rams grow a bit more.   — Tom Lundgren (hunt with Jeff Burwell August 2012)