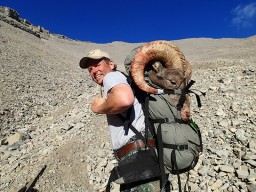 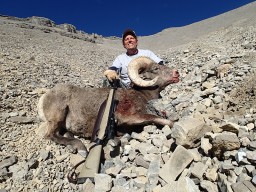 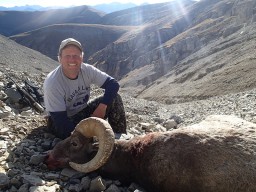 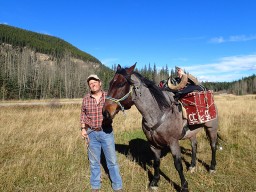 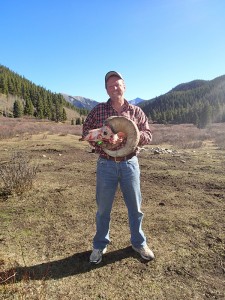 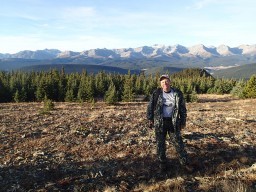 I was 17 days on foot in Alberta in 2012, 14 days on horseback in BC last year and back to a different part of Alberta this year (between Banff and Jasper National Parks) and on the 10th day . . .! In 41 days of difficult hunting, this was the first legal ram I saw and he was 4.5 miles away . . .! We saw grizzly bears (including a pair of bad bear 3.5 year-old twins who were not afraid of us), moose, wolves and martins every day. In total we saw about 150 sheep, about 130 of which were lambs and ewes. The head, cape and meat weighed about 120 pounds and we didn’t get back to the horses until about 10:30 at night. We rode about 3 hours down the mountain in a new moon back to camp in the pitch dark.

The chestnut horse (Echo) is an American Suffolk, which was wild for most of his life in this part of Alberta. They are typically bred as draught horses and he weighs about 1,400 pounds. The second horse is a 16-hand American Quarter Horse (Strawberry) and he also served as a pack horse.

I now need the Desert Bighorn Sheep (probably Mexico) to become one of about 1,500 hunters in the last 127 years to have the Grand Slam of North American Sheep.