THE COUNTRY
Although technically mopane forest of varying densities, the entire country of Zimbabwe, excluding cultivated land, is thornbush.  The Lowveld to the southeast and the Zambezi Valley to the north are extremely thick thornbush, while the rolling Midlands and the Matetsi region are somewhat less dense.

The road system throughout the country is excellent, second best on the continent only to South Africa.

GAME
Zimbabwe’s thornbush is ideal habitat for a wide variety of antelope species.  Creation of edge habitat because of cultivation and permanent water sources because of cattle ranching has only increased concentrations of plains game.  Zimbabwe has few rarities and no species that cannot be hunted elsewhere, but offers a varied game list including some of Africa’s most desirable species.  Southern greater kudu are exceptionally common and are among the largest in Africa.  Sable antelope are well distributed, more numerous than anywhere else in Africa and, in the northwest, of exceptional trophy quality. Common species,  such as impala, warthog, reedbuck, and duiker, are abundant.  Zimbabwe’s river systems have tremendous numbers of bushbuck – Limpopo to the south and Chobe to the north.  Lion, crocodile, leopard, hippo, buffalo, and elephant are abundant in specific areas.

Waterbuck, eland, blue wildebeest, tsessebe, and nyala are spotty in distributio, but can be locally abundant if on your wish list.

Availability of prey plus the ideal thornbush habitat makes Zimbabwe excellent leopard country from top to bottom.  At one time the whole country was also excellent lion and buffalo habitat, but here is where Zimbabwe diverges into two safaris within one country.

On the periphery – in the Wankie (now Hwange) Park corridor, the Zambezi Valley, and the Gona-Rhe-Zou – one finds Zimbabwe’s buffalo herds, the vast majority of lions, and almost all of her nearly 80,000 elephant.  In these border regions, safaris are conducted on vast forestry concessions or tribal trust lands, and one can hunt lion, leopard, buffalo, and elephant with expectations of success.  These areas have neither developed water sources nor edge habitat, so plains game, though present, are widely scattered.

In the center of the country, largely on private lands, one finds both great concentrations and great varieties of plains game.  Leopard is common as well, but with few exceptions elephant, buffalo, and lion are long gone from the interior of the country.

This “ranch hunting” is generally done on very large estates, largely free of any game fencing, and offers successful hunting for an incredible variety of antelope.  More traditional safaris in areas such as the Zambezi Valley will generally not yield a large bag of antelope, but are slanted toward some combination of elephant, lion, buffalo, and leopard.  A change of areas is generally a must for an expanded bag.

HUNTING CONDITIONS
Because of the dense thornbush, much Zimbabwe hunting is done on foot.  The more common species may be hunted by cruising with a vehicle until game is spotted, but buffalo and elephant, and often eland, sable, and kudu, will be hunted by tracking – always exciting and usually demanding.

The cats are hunted almost exclusively by baiting.  Although leopards are very plentiful, remember that Zimbabwe’s leopards have been hunted for a century.  It is always time-consuming to get a leopard, and is best done by really concentrating on Old Spots.

Camps vary immensely depending on the circumstances. On private lands, accommodations are usually guest quarters at the ranch headquarters.  In remote areas such as the Zambezi Valley, tent camps or thatched huts on cement slabs tend to be well-supplied and, whatever the accommodations, very comfortable.  Non-hunters are welcome!

The excellent road network, plus reasonably available internal commercial flights and fairly inexpensive charters, make it possible to combine several areas within even a fairly short safari.  Since plains game is common on private land but buffalo are very scarce, it is common and practical to spend three or four days hunting buffalo in the Valley, then whisk off to a large ranch in the Midlands or Lowveld for a week or so of plains game hunting.  However, combinations such as this make leopard hunting very difficult.  If leopard is the primary goal, the best course is to plan for 14 days in one area, concentrating on leopard. 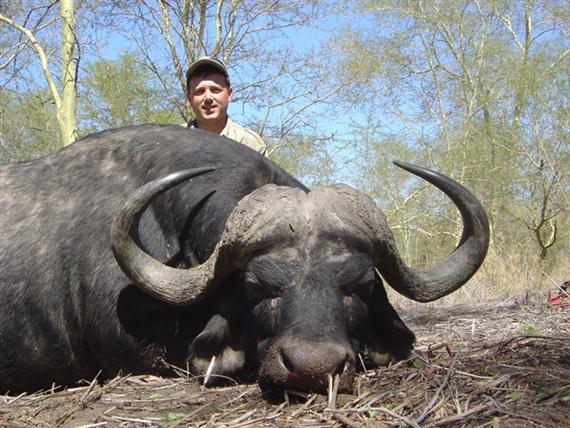 Hunting may be conducted throughout the year.  The short rains usually begin in early November and some of the remote areas become inaccessible.  The long rains usually start in January and hunting becomes very difficult until things start to dry out in April or May.  Prime months are June through September.  October, though very hot, can also be quite good.  However, some very fine elephant are taken in March, when ripening crops lure big bulls out of the thickets.

WEATHER
Typically June through August is winter in Zimbabwe, with dawn temperatures near freezing quite common and midday gloriously sunny.  April and May are a bit warmer, and September starts to warm up again.   October is very hot indeed, with hunting sensibly limited to early mornings and late afternoons.  However, game is usually concentrated near water at this time so hunting can be very good.

PROFESSIONAL HUNTERS
Zimbabwe's hunters are among the very finest in Africa.  Most did not grow up with the traditions of East African safari, but they did grow up on the land, shooting leopards out of the chicken coop and buffalo out of the row crops.  Both the professional hunters and their staffs also survived 15 years of bush war (sometimes on different sides).  They tend to be tough and exceptionally competent, and they know their country and its game.

Zambezi Valley
Rugged country of dense thorn and jess bush, home to thousands of buffalo and elephant, plenty of leopard, and a few good lion.  The Zambezi Valley offers primarily a dangerous game hunt; it holds quite a variety of plains game, but the animals are well dispersed over a huge area.  Buffalo here grow horns as large as anywhere in Africa.  The difference between here and East Africa is that sorting out a big bull is much more difficult in the dense thorn.  The Zambezi is also one of the best remaining places to hunt elephant.  The great animals are plentiful, and trophy quality is at least holding steady, if not increasing.  Each year tuskers of 70 to 80 pounds and more per side are taken, but the reality of the new millennium is that any hunter who passes up a 40 to 50 pounder risks getting skunked.

Matetsi-Wankie
The northwestern part of Zimbabwe is a bit more open mopane woodland.  Along the Wankie boundaries lions are relatively plentiful, as are buffalo.  Elephant are also common, but seem to grow smaller ivory than in the Valley or the Gona-Rhe-Zou.  However, the cool hills of the Matetsi grow exceptional quality of plains game.  Waterbuck, kudu, bushbuck, eland, sable, impala, and reedbuck generally have exceptional horn length.

Midlands and the Lowveld
This is the most developed part of Zimbabwe.  With so many ranchers turning from cattle to game, plains game hunting is exceptional in this area, with  great variety as well as quantity.  Leopard tend to be large, and are common.  Lion and buffalo are not common in this region.  The Gona-Rhe-Zou does have large tuskers.  Sable are not as large in the horn as in Matetsi, but might actually be more abundant.  Kudu are very common and grow large. This area also offers tsessebe and nyala.   Most plains game species are well represented.

SPECIAL CONSIDERATIONS
Visas are not required in advance and gun permits are readily obtained at the port of entry.  Malaria prophylaxis is recommended, especially for the Valley.  Always check with the International Red Cross or your doctor for current immunization advisories, but generally no immunizations are required for Zimbabwe.