Tanzania is one of the largest countries in Africa, and, as such, hosts a wide diversity of landforms and habitats.  In the north the country rises quickly from dense coastal thornbush to the high, lush Masai Steppe, a vast tableland at about 5,000 feet elevation, with numerous mountains and small mountain ranges rising from the plateau.  Masailand is semi-open, with patchy thornbush and thick hillsides interspersed with grassy openings.  As you move farther west the openings become more frequent, and eventually you reach the true short-grass savanna of the Serengeti.  To the south the land falls from the Masai Plateau and the thornbush becomes denser and more uniform.  To the southeast lies the vast Selous Reserve, country of thornbush and a hardwood forest known as miombo forest.

The regulations in Tanzania now require a legal lion to be at least six years old to be harvested.  This means only large, full maned lion can be taken.  They are also not harvesting lions living with a pride; only solitary old males.  Consequently, success on lion has dropped in some areas.  This was instituted several years ago and we expect the opportunity for bigger lions to improve dramatically over the next few years.

Tanzania is a vast country with relatively few roads, and fewer paved roads.  Safari hunting started in the early years of this century, with the typical safari starting in Nairobi, Kenya, and winding its way down through Tanganyika.  “Must” reading for anyone hunting Tanzania is Ernest Hemingway’s “Green Hills of Africa,” about his 1936 safari; and Robert Ruark’s “Horn of the Hunter,” written in 1952.  Almost unbelievably, the only significant changes to Tanzanian hunting today are these:  black rhino is literally gone and elephant have retreated to the thickets.

The system of “hunting blocks” established by the British remains in place, but today the hunting blocks are held as exclusive concessions by Tanzania’s outfitters.  Tent camps remain the norm, just as in Hemingway and Ruark’s day, but the camps today are more or less permanent and probably more comfortable.

While game is quite plentiful, it might be widely distributed over a vast area or it might be concentrated near available water.  The timing of your hunt is extremely important.

Hunting blocks are huge, and that makes for a long hunting day.  Anticipate leaving camp before dawn.  Often distance makes it impractical to return to camp at midday.  In cooler weather it may be possible to hunt throughout the day, but most professional hunters prefer the sensible approach of taking a long rest at midday in a shady spot.  Camp is usually not reached until well after dark, where a hot shower and a cold drink await.  To lie in your tent listening to night sounds and the occasional roar of a distant lion tends to make you wish the hunting days were 24 hours long!  Life is too short; Enjoy Africa’s Finest Safari Destination!! 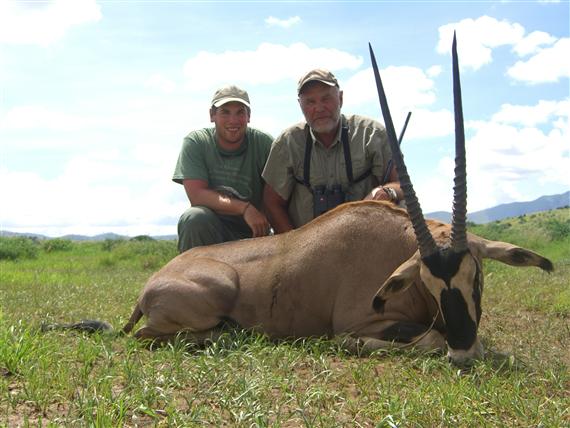 The general hunting season opens July 1 and runs through December 31.  There is very good hunting at all times in the various areas of Tanzania.  We can tell you which areas are best at the time period you can hunt!

WEATHER
Tanzania lies south of the Equator, so the winter months of July and August usually see very cool nights, with midday sunny and warm.   In September, temperatures begin to rise.  The high Masai Plateau offers cooling nights literally throughout the year.

Masailand
Particularly a scenic and pleasant country, ranging from mostly thornbush in the east and south to the open Rift Valley with its wooded hillsides, and on to the short-grass savannas on the edge of the Serengeti.  With Sudan and Kenya still closed, Masailand is the premiere area where the traditional East African species can still be hunted.  As such, Masailand probably offers the most extensive list in all Africa of animals that can be(obtained nowhere else in Africa).  These include Grant's and Thompson's gazelle (with Robert’s gazelle located in just one small area); Patterson's eland, lesser kudu; gerenuk, Kirk's dik dik, Chandler's mountain reedbuck, fringe-eared oryx, giant Coke's hartebeest; white-bearded wildebeest, and east African impala.  On the western edges, one finds topi, and on the southern fringes roan - but lesser kudu will probably not be present.   Buffalo are not extremely plentiful, existing in small herds along the rivers and in the hills and mountains, but the buffalo horn potential in Masailand is fabulous.  Time has not changed the magnificent Masai people themselves, who dress and live as they have for centuries

Central Tanzania
The hunting in this region centers around the Rungwa, Ugalla, and Ruaha areas.  This is a low country of heavy bush, plenty of tsetse flies, few people, and lots of game.  Here the southern species begin to take over from the east African game.  Buffalo are common, but generally small herds along the rivers.  Lion and leopard are plentiful as well, with good manes likely.  One of the great strengths of this region - this is where the ranges of some of Africa's most prized antelope species come together.  One can hunt roan, sable, greater kudu, and eland all in the same area - plus waterbuck, topi, and all the other common species.

Western Tanzania
Little hunted and hard to reach, the west is mostly sandy miombo forest with vast swamps and river floodplains.  Concessions hold huge herds of buffalo and plains game.  The fabulously-maned lions of the west are legendary, but can be difficult to bait.  Leopard are also quite common.  Sable, roan, and greater and lesser kudu can all be taken from this region.   East African sitatunga are actually surprisingly common along most of the swamps and rivers.

Selous Reserve
Largest game reserve in the world, the size of Switzerland, the Selous holds huge numbers of buffalo, lots of lion, untold leopard, and large numbers of elephant.  Generally thick thornbush with scattered openings and belts of dense forest, the Selous is never easy country to hunt, but it remains one of Africa's best areas for general bag and especially dangerous game hunting.  Well-maned lions are not common, but the Selous has enough lions that a selective hunter can usually prevail.  Elephant hunting in selected areas and time periods is excellent.  Roosevelt sable are relatively plentiful, and this is probably the very best place for east African greater kudu, and unquestionably the best place for east African eland.  Southern impala, Nyassaland wildebeest, Lichtenstein's hartebeest, waterbuck, southern impala, bushbuck, reedbuck, crocodile, warthog, and hippo are also quite common.  Buffalo are found in vast herds.

Hunting two or more areas offers the greatest safari experience in Africa!  The Masai areas combined with any of the other regions of Tanzania give the hunter four of the Big Five plus east African plains game and southern African game, 25-30 species.  To combine two areas we recommend 25 days, three areas 28 to 30 days.  These multiple area safaris are the ultimate hunting trip offered anywhere!

In a country so vast, air charter is often the only way to reach your camp.  A twin engine aircraft is the preferred choice of travel across this undeveloped land.  Hunters can drive to many of the Masai concession in two to five hours;  however, all other areas are one and a half to two and a half hours each way by charter aircraft from Dar es Salaam or Arusha.  This amounts to five to ten hours of air charter at $1,000 per hour or more.  The flight can often be shared with other clients going and coming.  Most twin engines aircraft can handle three to four passengers plus limited baggage.

Visa's should be obtained in advance and gun permits must be obtained 2 to 3 months in advance with accurate serial numbers and quantities of ammunition.  At this time, proof of yellow fever inoculation is required for entry, and malaria prophylaxis is strongly recommended.