The American antelope is part of western tradition and heritage.  It is one of the most handsome and elegant of all North American big game animals.  It is a highly specialized creature fitting a niche of habitat that other large animals, except the once abundant buffalo, were not able to utilize in numbers.  It is a true native of North America, having been on this continent for millions of years.  It evolved in several varieties long ago, has no close relatives anywhere in the world, and is the sole remaining member of its family.  It is rather curious that the animal is probably the victim of misnaming which has caused confusion and argument among hunters and observers of wildlife since the country was settled.  Presumably explorers and pioneers called it antelope because of some of its physical attributes reminiscent of antelope from Africa, Asia and elsewhere.  In reality, there are no antelope outside the “Old World”.  The popular name stuck until scientists proved the animal was not one of that tribe.  To set the record straight, it was given the official name “pronghorn” because of its unique horn configuration.  To hunters, these dashing speedsters of the plains will always simply be antelope – American antelope.

It is said that there were millions of antelope in immense bands almost everywhere throughout its vast range, some estimates as high as 50 to 100 million.  With the west being settled, vast numbers were rounded up and slaughtered.  By early in this century, only a meager to 12 to 20 thousand antelope remained.  Fortunately, this dramatic decline was recognized by the early conservationists and today  pronghorn number over one million in the western states.

We arrange pronghorn antelope hunts in Montana and New Mexico.  Montana’s pronghorn antelope populations are most abundant in central and eastern Montana.  The hunting season lasts for four weeks, generally opening the second weekend in October and closing the second weekend in November.  The licenses are issued by drawing.  Odds of drawing the license vary from 30 to 75% depending on which region you apply in.  Hunting licenses cost around $220 and they must be applied for by application each year by the June 1deadline.  Successful applicants are notified by the middle of August as to success.

New Mexico also offers some fine pronghorn antelope hunting although the numbers of antelope found in this state are far less, for example, than Montana and Wyoming.  New Mexico also has a very short hunting season, normally, a two-day season in August and another two- to three-day season in September although this may change a bit in the future.  While New Mexico may have fewer antelope numbers, it more than makes up for it in the quality of pronghorn antelope that can be found here.  Some of the biggest pronghorn antelope that have ever been taken have been found in New Mexico on private lands.  Normally, these licenses are obtained through landowner permits, which are very limited, and hunters must book far in advance to secure the best areas.  These hunts normally run $3,000 to $4,500 per hunter on a one hunter/one guide basis.  Booking far in advance is the best way to secure one of these landowner permits. 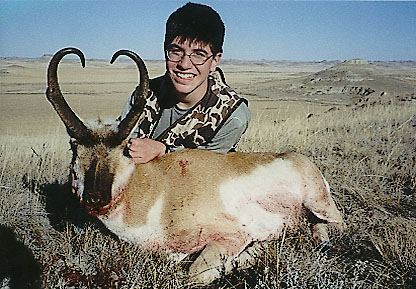 Montana produces some fine pronghorns with an average of 13 to 14 inches in size, with some bucks exceeding 15 and 16 inches.   Most antelope are hunted on vast private land ranches in central and eastern Montana and success is at or near 100%.

Pronghorn antelope are a great animal to introduce new hunters due to  high success or for seasoned veterans who like to stalk a big game animal which we feel has some of the best eyesight of any North American animal.

Accommodations on these hunts are normally remote trailer camps or ranch house facilities.  In some cases, you may even stay at a motel and eat at restaurants.  Pronghorn antelope can easily be hunted in just a few days so long time periods are not a necessity.  Pronghorn can also be combined with mule deer, whitetail and elk depending on license availability and season time periods.  Check with Atchesons for details.

Arizona is also well known for producing large pronghorn antelope but the odds of drawing a tag are very low and our company does not pursue that region for this reason.