Hunting far north of Canada’s Arctic Circle for Nanook, the polar bear, is one of the greatest adventures available to hunters  Legislation has recently been passed to allow import of polar bear skins into the United States, the first since 1972.  Polar bear permits are issued to Eskimo communities scattered across the Arctic coast region of the Northwest Territories.  You hunt with highly skilled Inuit (Eskimo) guides. Our suggested hunts are based from communities such as Holman Island, Pelly Bay, Spence Bay, and Gjoa Haven, all of which have high harvest quotas for polar bears.  This quota is proportionate to and reflects the local bear population.

Hunting is done from outpost camps in prime areas which may be up to 100 miles from the nearest Inuit community.  All hunting is done by dog team.  Native Inuit guides handle the entire expedition.  Hunters fly to a local village.  The hunter and the camp are then transported out onto the ice pack, where the polar bears are hunting their main quarry – seals.

Each hunter will have one guide and one assistant.  The hunter and the guide will travel by dogsled, traveling great distances looking for tracks of a large, mature bear.  Once the tracks are cut, the hunter will follow the bear, sometimes for several days.  The helper will follow along behind with a snowmobile and sled containing a double-walled tent, heater, dog food, support equipment, etc.

Polar Bear is no longer portable to The United States, but other countries enjoy import status!! 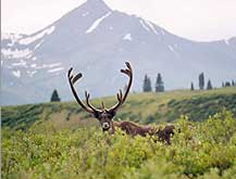 The hunts take place during March and April.  Daylight hours are long, with 18 hours of daylight or more.  Temperatures are quite cold - sub-zero is the norm.

The Inuits loan hunters suitable Arctic clothing - parka, pants, mittens, and boots or we recommend you bring some of your own as well.