Marco Polo Sheep, also known as the Pamir Argali Sheep, are found in Tajikistan and Kyrgyzstan. We have been working with a fantastic outfitter for Marco Polo hunts since 1999 and have sent over 100 clients on these high altitude adventures with him. He received the Atcheson’s Professional Hunter of the Year Award in 2012 and has led many hunters in to the Pamir and Tian Shan Mountains ranges in search of Pamir Argali (Marco Polo), Kyrgyz Argali (Hume Argali) and Tian Shan Argali.

The hunting takes place in some of the world highest altitudes and base camps are often at 10,000 to 14,000 feet and game can use mountainous landscape that reaches 16,000 feet or more. Preparing yourself for the rigors of this hunt can mean the difference between success and failure. It will be a physically demanding hunt. Horses are used to move hunters from the sheep camp far into the mountains. Horses really help you make the climb. Some camps and terrain allow for the use of 4-wheel drive jeeps. In moderate terrain, driving 100 miles a day or more is common. In such open terrain, expect long and intricate stalks. Some camps can only be reached by helicopter and the hunting by horseback or on foot, the same as some sheep hunts in North America.

Sheep prefer open grass covered mountains or foothills and ibex prefer very steep cliff terrain. Game is often spotted in the evening and then approached early the next morning using the cover of darkness to move in on the herds. Hunters can take two ibex per hunter. A second sheep is possible by purchasing a second hunt. U.S. import permits for Pamir Argali (Marco Polo) and Kyrgyz Argali (Hume Argali) have a May 1st deadline. Tien Shan Argali cannot be imported into the U.S.

Over time, prime hunting periods have been clearly identified and schedules adjusted to benefit the hunters. Some areas have excellent hunting for Himalayan Ibex and Tian Shan Ibex, so a combo hunt can be arranged. All the hunts are custom designed to the individual goals of each hunter. Hunters are generally based from comfortable cabins in the heart of good hunting; tent spike camps can also be productive at times. Each year pre-season scouting has enabled our guides to locate sheep in excess of 60 inches or better.  These specialized hunts can be developed for the hunter wanting a world-class animal. 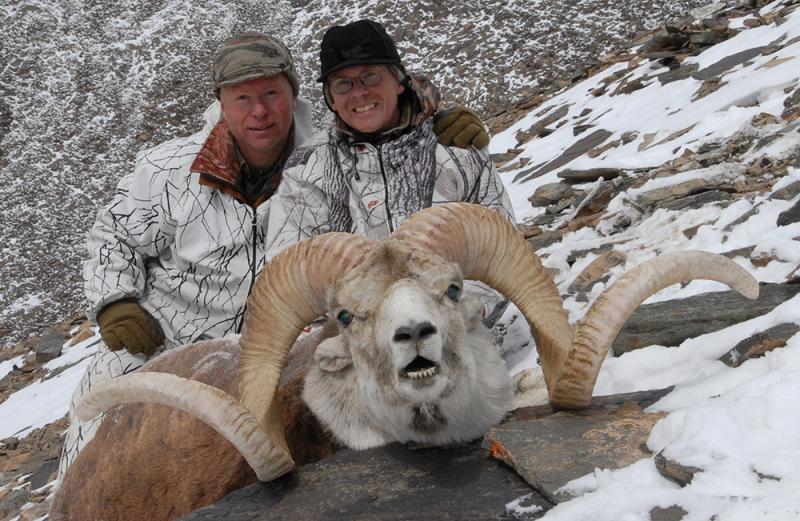 Early October to mid-December, then late January until March 1st.

Hunters fly to Bishkek, Kyrgyzstan, a modem city with modem accommodations. The Bishkek airport is gateway to hunting grounds in both Tajikistan and Kyrgyzstan. Visas for either country will be issued on arrival. Firearms permits must be applied for in advance. The hunt, including travel days, is about 14 days, with 8 to 10 days of actual hunting. The hunt includes import license for hunting rifles, the required veterinary certificate, and food and lodging while on the hunt. Not included is airfare to/from Moscow/Bishkek, hotel and meals before and after the hunt, visas, overweight baggage, and gratuities.