Underestimating goat hunting is a common mistake by sportsmen these days.  With proper planning, a goat hunt can be one of the greatest hunting experiences for mountain game anywhere in the world.  The word “vertical” usually comes to mind when most hunters think of typical mountain goat habitat.  This really stands true; however, most goats use vertical country largely to avoid predators, and often feed in grassy slopes nearby that can be surprisingly gentle.

Success on mountain goats is highest August through mid September, when weather is less likely to be a problem.  Billy goats have surprisingly good hair at this time.  If you are short on time and can only take a seven-day hunt, this is generally the time period to pick.  We still encourage ten-day hunts or longer.  Storms and fog lasting three or four days or longer are not uncommon at any time of the year.

You can combine goat with a variety of species during this time period, including good black bear, moose, elk, caribou, dall sheep, stone sheep, grizzly bear, sitka blacktail, and good fishing for salmon and various types of trout.

Sharing a guide is a possibility on goat at this time of year, on a ten-day or longer hunt.

Because the goats are in remote alpine areas at this time, horseback and backpack hunts are pretty much the only way to get the job done.  One thing for sure, you need to be in good shape.  Considerable climbing will be involved.  Goats are not particularly hard to find; the white color makes them relatively easy to spot.  You’ll spend far more time climbing mountains and stalking goats, as a rule. All emphasis is placed on harvesting old, mature billy goats.

On combo hunts, you’ll probably hunt areas that hold nothing but mountain goat, and then move to a secondary choice if you have the time.  The key to second animals is a longer hunt. 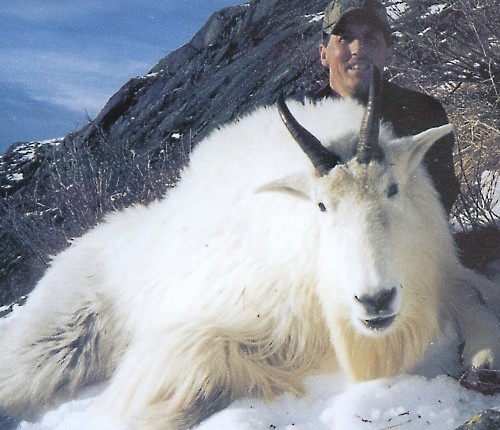 From mid-September through the end of November, a variety of other tactics will be used.  If you are hunting in northern British Columbia or Alaska, weather can be a real factor.  It is usually a good idea to have a mixed bag hunt planned.  In the event the goat hunt weathers out, you can carry on in lower elevations with moose, elk, mule deer, caribou, and bear.    A ten to 14-day hunt can provide you with a larger window of good weather.

Southeast British Columbia has very fine goat hunting, actually some of the highest density of goat per square mile found anywhere.  Mountain goats in southeast British Columbia share their habitat with prime elk, Shiras moose, mule deer, whitetail, and black bear, making it a terrific location for a good mixed bag hunt.  You aren’t quite the hostage of bad weather you would be on a fly-in hunt in the north.  You typically ride by horseback from a trailhead reached by vehicle into goat habitat.  You have more flexibility.  Again, a ten to 14-day hunt can be a key.  Goat size is similar throughout the range.  There is no drawing for goats in any of our recommended areas.