All the areas that we recommend for elk hunts offer NO DRAWING elk tags. You can plan your trip with peace of mind that you will have no difficulty obtaining a license.

There really are only two styles of elk hunts available.  The traditional backcountry wilderness camp requires a somewhat more rugged hunter, willing to use horses and mules extensively, and do considerable walking.  A wilderness hunter must take the time required to hunt bulls in a wilderness environment.  Bulls grow to a quality size in these areas because of the nature of the terrain they live in – steep, rugged, and often heavily timbered.  Many hunters feel this type of hunting is elk hunting at its very best.  But it is not for everyone.  Often you can combine mule deer, black bear, antelope, mountain goat, moose, sheep, and caribou, even grizzly bear.  The best camps are set up to handle no more than two to four hunters.

Wilderness hunts are booked in Montana, Idaho, and British Columbia.  These hunts are available from late August through the end of November.  A wide variety of hunting conditions are available.  Elk are generally located in remote backcountry at this point, accessed by horseback only.  Some camps require flying into a wilderness airstrip, then on to the camp by horseback.  It usually takes at least one day to reach your spike camp, which is part of your hunt. Small tent camps are used to accommodate hunters in these regions.

Lodge-style hunts are generally located on or near private land in Montana, Utah, and New Mexico.  A property boundary controls harvest of the elk, allowing bulls to mature, sometimes to great size.  Private land has better grazing and more water.  These hunts are generally five to seven days in length.  If you are short on time, a ranch hunt is unquestionably a better choice.  Occasionally other species may be available from a ranch hunt – mule deer, perhaps antelope or black bear – but generally speaking, it is elk only.  Vehicles are used extensively to move hunters around, with only occasional use of horses.  Ranch hunts favor larger parties of hunters, with six to eight hunters or more not being handicapped.  Lodge hunts are available in our favorite areas starting in September through December.

British Columbia may be the best area of all at this point in time for a wilderness hunt. Restrictions on elk are tough.  The law of the land is six-point bull only.  Good hunting for elk can be had from southern British Columbia right through to the northernmost reaches of the province.

September brings many changes.  You can include caribou, moose, mountain goat, mule deer, and black bear, or just focus on a big bull elk.  It is the rut at this time for elk, moose, and caribou.  Bugling in a mature bull elk is one of the greatest hunting thrills of all.  The rut continues through to late October. 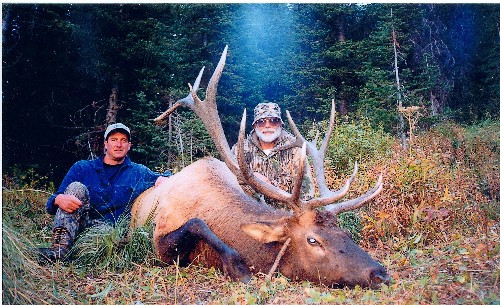