Cameroon is located in west central Africa.  It is a large country, slightly larger than the states of Colorado and Kansas combined.  Cameroon has a very diverse environment and two regions of special interest to the hunter  including the rain forest district in the southwest corner of the Cameroon bordering the Central African Republic and the Congo.  This area is known as the Boumba.  This has the highest concentration of bongo and forest elephant in the Cameroon.  Our outfitters’ quota there accounts for some 40% of the hunting licenses granted for the entire country of Cameroon to hunt Dwarf Buffalo and Forest Sitatunga.  The area contains excellent populations of giant forest hog and numerous small duikers.

Time is critical to hunt this region.  Waiting until mid March through the end of June allows hunters to take advantage of the daily rain showers that wet the ground,  allowing easier tracking and quiet conditions to stalk the forest game.  The hunting concessions are exclusive guiding territory.  Hunting includes the use of boats on rivers as access to remote hunting grounds which takes place on foot via tracking and some areas that have had some logging.  Using logging roads allows easy access for the use of tracking and dogs on occasion.

The second area lies toward the northern end of the Cameroon where hunting takes place near two national parks, Bouba Mjida and Labenoue, where hunters can expect to encounter amazingly large numbers of Lord Derby eland, giant topi, elephant, western roan, northwestern buffalo, hippo, buffalo, Sing Sing waterbuck, harnessed bushbuck and western hartebeest.    Hunting in the Savannah is similar to hunting areas of east Africa with tent camps being the normal base of operations, using a safari vehicle to cruise the local countryside in search of species you desire.

This region is best hunted from January through April.  Three different safari packages are available.  You could do a 16-day hunt, concentrating on forest area for bongo, elephant, etc., or a 16 day safari in the Savannah area with a focus on Lord Derby eland, roan, Western buffalo and plains game, or a special 31-day hunt during the month of April that would incorporate hunting both areas back-to back.  Like many areas of Africa, it is a great distance from commercial airline destination points to the hunting areas.  Charters are shared to keep costs more manageable.  Sticking to  strict arrival and departure dates is critical for affordable charter flights.  Commercial flights from Europe service both Yaoundé and Douala. 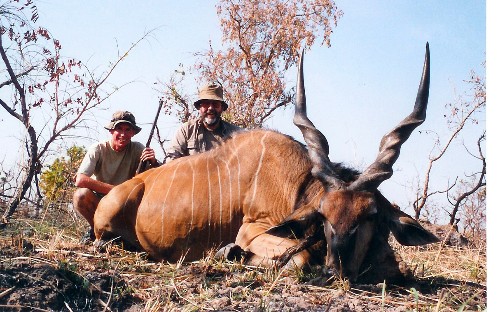 Hunting Conditions
The Cameroon lies just north of the Equator so temperatures are on the warm side year round.  The Savannah areas are drier and temperatures are more moderate, but it is always a bit on the hot side, 80 to 90 degrees being the norm.  Temperatures drop very little at night.  Insects are rare in the earlier part of the season.  As the season progresses toward April, light rains begin to green up the area, attracting plains game animals but also increasing the insect population.  You will be pleasantly surprised at how wide spread plains game antelope are found in the Savannah district.

Forest District
The Forest District requires a conditioned hunter and requires hours of walking through the forest, often in extreme heat in the company of a lot of insects.  Some of the camps do allow hunting with the use of dogs which is significantly easier on the hunter.  A number of these camps are air conditioned to help insure a good nights sleep.

Notes On Species Available
The Savannah area has a surprising number of roan and each year, good bulls in the upper 20 inch class are taken.  Lord Derby eland average in the high 40 inch class and bulls exceeding 50 inches are taken each year.  Lion are not particularly abundant and  difficult to bait.  Leopard are rare and not hunted.  Elephant harvested in Cameroon can not be imported into the United States.   Please note that these are the forest elephant variety and are somewhat smaller than their Savannah cousins to the south and to the east.  A large bull would be considered 15  to 25 pounds of ivory per side.  Numbers are good!

Licensing
Three different hunting licenses are available in the Cameroon and are broken into large, medium and small antelope species.  Hunters are allowed to take a limited number of species from each category so making a solid choice in advance is a must.  See licensing details.