The Blanford (or Blandford) Urial is also called the Baluchistan Urial. They stand about 30 inches at the shoulder and weigh up to 80-90 pounds. It is similar to the Afghan Urial, but smaller, with a lesser bib and neck ruff and no distinct saddle patch. Blanford Urial are plentiful in the arid hills of Pakistan, so hunters have a great chance to collect this beautiful and highly sought after trophy.

The world record for the Blandford Urial was 31 inches until recently, but due to good rain the last few years, there is better vegetation in the area, which has positively affected horn growth.  A few years ago, this outfitter collected a 34 inch Blandford Urial that turned out to be #1 SCI World Record at the time. But the following year, they took two 35 inch and one 36 inch Urial rams, breaking the world record three times in one season.

Probably one of the easiest and least physically demanding mountain game hunts available anywhere. Hunting takes place in the famed Dureji game management area in southern Pakistan, 93 miles north of Karachi. A 3 hour drive on a mostly dirt road will get you to camp and the hunting grounds. The area is traditionally known for its abundance of wildlife. The highest point in the area is 3,000 feet, while most of the hunting takes place at the altitude of 600-2,100 feet.

Hunters stay in one of the guest houses built by the family that ruled the area for many centuries. It is one of the most luxurious hunting accommodations in Pakistan. The inherent security of this hunting area make it very safe and friendly to travelers.

The skin of the trophy is carefully treated. Ears, lips, and nose are opened and salted, and the skull is boiled and cleaned. Later, the trophy is carefully packed for shipment. After all papers are prepared (which are necessary for the shipment), the shipment is sent to the address that you provide. Receiving the trophies could take couple of months, and shipment cost is around US $500 -750 depending on the address. 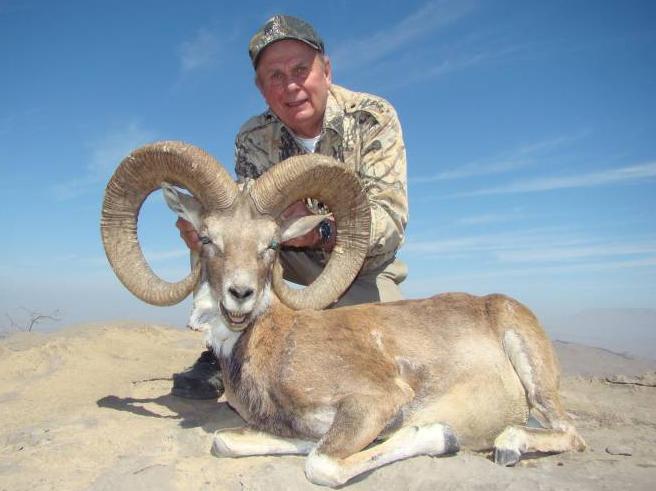 Due to hot weather conditions in the area, early season hunts in January, February and March are ideal. The temperature will be lower at this time of the year, which helps hunting considerably.

A combination hunt with the Sindh Ibex and Blanford Urial is common on this hunt. Both species share the same habitat in many parts of the 130,000 hectare territory and hunters often collect both animals in a single day.