This animal is really not a wild sheep, but a goat, the ibex type.  Horns greatly resemble Himalayan blue sheep and have long been considered part of the world slam of sheep.   This is physically a very challenging trip.  Hunters should be strong in nature and able to hike very steep country.  Week-long hunts are available August through November. Hunts take place in Azerbaijan and Russia.

The mid Caucasian tur is found east of Mount Elbrus and west of Dagestan in the Caucasus Mountains.  Hunted in Osetia, these hunts can be conducted as early as August 1, and run through the middle of December.  A seven-day hunt by backpack should produce tur with horns 28 to 34 inches in length.  Also available are Caucasian chamois.  On later season hunts, additional game, such as red stag, European brown bear, and large Russian boar are available.   A full species hunt runs two weeks.  We recommend an additional three days on the tur hunt for chamois.  Hunters should be of a very rugged nature and capable of extremely strenuous backpack hunting for tur and chamois.  The forest game animals are hunted from a nearby lodge, not too difficult.

The Kuban tur has a dramatically different horn growth, as opposed to the Dagestan (Eastern) or mid Caucasian tur.  It tends to be very ibex-like, heavily ridged horns and long, arching ibex-type horns.   We found the easiest time period to hunt these animals is late November/early December.  Caucasian chamois can be included as well. 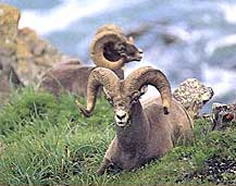