Asiatic Bighorn Sheep, or Snow Sheep as they are commonly known, cover a range as large as the continental United States. Variations of the sheep are present throughout much of Siberia. We began fielding snow sheep hunters in the early 1990’s and have sent over 100 hunters on these trips. We have operators throughout all Snow Sheep areas, including Kamchatka, Koyrak, and Okhotsk Mountain ranges. The largest Snow Sheep appear to be found on the Kamchatka Peninsula where better range conditions and more rain enhances growth of larger, older rams.

The hunting regions can be reached with ease via Alaska or by flying via Moscow. All the hunts include one to two nights of hotel rooms on either end of the hunt, helicopter transfer to and from the area, if necessary, guides, interpreters, and CITES veterinarian permit for export of the trophy. Our trusted outfitters are renowned for their ability to judge rams on the hoof. One of our outfitters even received the Atcheson’s Professional Hunter of the Year Award in 2012!

The Kamchatka snow sheep is the largest horned species of snow sheep, with dark chocolate colored hair and massive horns. It looks very much like North America’s Rocky Mountain Bighorn. The largest rams taken score in the mid 170’s. Our hunting area has stunning scenery, snow covered volcanoes and untouched mountain terrain. Camps and services are as good as any found in the sheep camps of North America.

Koryak Snow Sheep are the smallest of the Asian thin horns in size and horn, but very abundant in number. These sheep have light gray to brown fur and often have a white forehead. The largest rams will have a score of 155 points and are often broomed. This species is found from the northern reaches of the Kamchatka Peninsula to the mainland of Siberia. The terrain is similar to the Brooks Range in Alaska; not too rough. The camps are all located north of the 62nd parallel. Each hunter has his own guide. Success has been very high. A second ram can be arranged in advance at the time of booking. The best hunting period is August /September. The trip will take 12 days, of which the actual hunting would be 9 to 10 days. Due to its extreme northern location, early season hunting is strongly recommended. Up to three hunters per hunt.

All the sheep located in the Yakutia Region are considered to be Yakutian Snow Sheep. These sheep are found in the Yakutia area of Siberia, from the Lena River eastward, north of the 62nd parallel, including the Verkhoyansk, Chersk, Mom, Kolyma, and other ranges. These areas are mountainous, but the terrain is surprisingly gentle. Each hunter has his own guide and hunts on foot.

The majority of this subspecies are found in the Khabarovsk Region of Siberia. However, within the Magadan Region, the boundary is the southern route of the Trans-Siberian Highway, from the city of Magadan until it crosses the border of Yakutia. The boundary then goes south and follows the border of Yakutia. The area for the Okhotsk snow sheep in Magadan is relatively small. 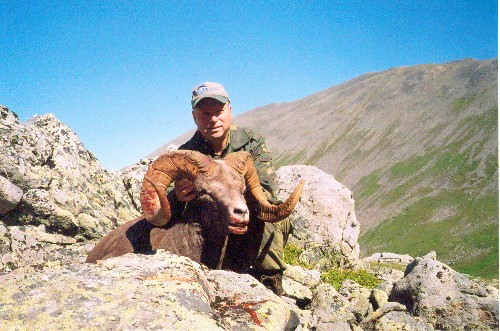 Snow Sheep hunting is seasonal, taking place in August or early September. We field parties of up to four hunters on ten days during this prime time.

A good plan on Snow Sheep hunting is to do two of the hunts back to back. Much of the hunting can be by backpack. Unquestionably, it can be the most exhausting Asian sheep hunts. These animals are scattered by nature and physically demanding to hunt, so expect a lot of walking. Nevertheless, sheep numbers are fair to good and high success is the norm.

Accommodations are private dome tents and there is a kitchen tent with a cook. Each camp has two to four hunters each. Spike camps are often used to reach remote locations. Again, the trip will take 12 days, of which the actual hunting would be 9 to 10 days.