The outfitter we deal with has an area on the southern end of Kamchatka where the bears generally grow larger due to the massive salmon runs located in this particular area.  This always results in bigger bears, so when you are considering going to Russia, keep this in mind if you are after the biggest bears in that region.

One or two hunts are scheduled per year and only during the primest hunting dates.  This generally occurs the last two weeks of April or first week of May.  Bears are hunted as they are emerging from their dens.  A great deal of snow often covers the ground.  Hunters are flown to tent base camps. Snowmobiles are used to transport hunters afield each day.  Snow shoes and skis are often used when hunting on foot.  Bears are also successfully hunted via baiting.

The bears are similar to the grizzly bears in North America in size.  About eight to eight and a half foot would be a good quality bear.  Occasionally, nine-foot bears are taken.  Skull measurements would run 22 to 24 inches on the average, with only the largest bears having skulls exceeding 26 inches.  What really stands out on Siberian bear are the quality of their pelts.  They are thick and luxurious, undoubtedly a product of Siberia’s dry but very cold climate.

The terrain is similar to the Alaskan Peninsula, rolling hills, sparse alder, and stunted spruce.  European outfitters who are well versed in hunting this area escort all trips.  Local Russian guides are used. 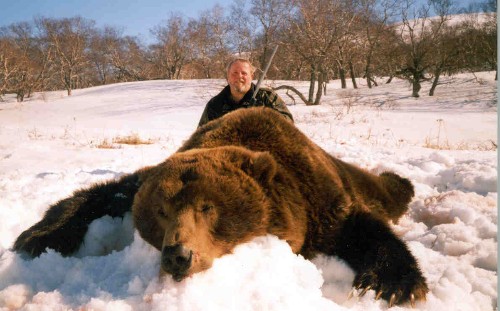