Ibex and Sheep Hunting in Iran

Iran’s wide array of wildlife and unsurpassed historic and natural beauty makes it a perfect destination for your next hunting adventure. From hunting the magnificent Trans Caspian Urial to numerous mouflon subspecies, here you can collect eight separate sheep along with two different ibex subspecies. Very few countries in Asia, if any, provide hunters with as many species of mountain game as Iran does.

Although there are two principle species of wild sheep in Iran, Ovis vignei (urial) and Ovis gmelini (mouflon,) various hybrid populations are spread all across the mountainous habitats of the country. Morphological variety among different populations and even between individuals of the same population has been one of the most controversial biological topics in scientific classification of wild sheep population in Iran. Many of these populations are now isolated due to human development and are considered to be different subspecies for record keeping purposes.

Sheep and Ibex have a wide distribution in the country and are hunted in many areas throughout. Most sheep in Iran live in hilly terrain at not very high elevations. Most hunts are carried out at the altitudes between 6000-10,500 feet (2,000-3,500m) with the majority being at about 8,200 feet (2,500m). Therefore, altitude has never been an issue while hunting mouflon and urial species. As with all other sheep hunting, a spot and stalking type of hunt is the main method. Some short drives on a 4×4 vehicle can be applicable in order to locate the animals.

Armenian Mouflon: Found in northwestern Iran east to Tabriz and south to the central Zagros mountain.

Red Sheep:  Northern Iran in the Albroz Mountains, along with an isolated population in the Kavir Desert of north-central Iran. Boundaries with the Armenian mouflon to the west and the TCU to the east are unclear.

Esfahan Mouflon: Found only in the mountains near the city of Esfehan. R.Valdez restricts it to sheep with cervical horns that inhabit the Tange-Sayad and Kolah-Gazi Wildlife refuges southwest and southeast of Esfehan. However GSCO also accepts sheep from the Mooteh Reserve as Esfehan sheep.

Shiraz Mouflon: The boundary for Shiraz sheep is somewhat controversial. GSCO and SCI record book accept that Shiraz mouflon is found in the reserve near the city of Shiraz and south and east to the cities of Jahrom and Darab.

Afghan Urial: North and south of Birjand. Northernmost boundary is the city of Gonabad while the southernmost is Nehbandan. 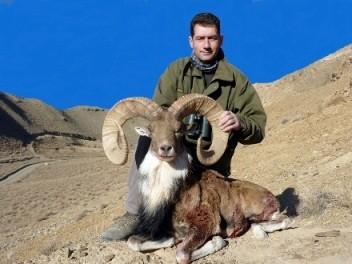 The hunting season in Iran runs from October through March. The rutting time for sheep is in November, and for Ibex in December. These months are considered to be the best for a better chance for big rams. On the other hand, in practice, our hunters have had successful hunts even in other periods. The temperature should be around 20-25 Celcius in October. Later on in the season weather gets cooler, especially in northern areas of the country.

In most areas, guest houses provided by the game department are used hunters. These are clean but simple concrete-block buildings that are furnished with bed & blanket and hot shower. All of them have 220v electricity. Most areas have coverage for cell phones.

There are no direct flights to Tehran  from North America or Australia. However, there are flights direct from numerous European and Asian cities, as well as cities in the Middle East. Iran Air, the national carrier of the country, flies to many destinations such as London, Amsterdam, Vienna, Istanbul, and Tokyo. Alternatively, one can take a Turkish airlines flight all the way to Tehran via Istanbul or Emirates flight via Dubai. You will be met by our representative once you landed in Tehran. After all the customs formalities are done, you will either take another flight or car ride –or both - which will transfer you to the hunting area. Since the areas for different species vary, distances and the spent time can also alter accordingly.

Itinerary (tentative):  Iran game law allows 5 hunting days for each species, although most hunts can practically be  completed in 3-4 days.
Day 01: Arrival to Tehran, transfer to the area.
Day 02-06: Hunting period.
Day 07: Transfer to either Tehran or next booked hunting area.