Altai (Siberian) Ibex hunts are offered in the West Sajans Mountains, south-east of Abakan, bordering Mongolia to the south. These beautiful hunting grounds are also the headwaters of the Yenisei River. This hunt is unique as large boats are used for hunting access from a very large reservoir on the Jenisej River. Hunters hunt on foot from the boat or hike to overnight in spike camps in alpine basins. Each hunter has their own guide. We have been working with a fantastic outfitter for Altai (Siberian) Ibex hunts since 1999 and have sent over 100 clients on these high altitude adventures with him. He received the Atcheson’s Professional Hunter of the Year Award in 2012.

The terrain is mountainous, but not alpine. There are no special demands on the hunter other than being in decent physical shape. The largest Ibex are found at the top of surrounding rock formations, a climb of about 2,000 feet. Russia’s Sajan Mountain range greatly resembles the northern Rocky Mountains in northwest Montana and southeast British Columbia. The steep slopes tend to be grass covered on south facing slopes and north slopes covered in spruce, tamarack and scattered brush. High on the slopes it gives way to open sub-alpine basins. Ideal habitat for a variety of game, its mountains and basins contain good numbers of ibex (limit two per hunter), Maral Stag (a North American elk look alike), Siberian Grizzly, and Siberian Roe Buck.

This region is hunted from mid-September to mid-October. Weather conditions are identical to Montana at this time, with cool nights and pleasant days. The stag are in full rut. The skin conditions of the bear, ibex and roebuck are prime.

Hunters fly commercial to Abakan via Moscow, then travel three hours by car to the reservoir, then by boat another 8-10 hours to the base camp. The hunt is about 14 days in which 8-10 days are actual hunting days. Success on ibex is very high, with stag, roebuck and grizzly being more difficult. Hunters generally take 2-3 species.

The hunt includes transportation to/from hunting area, import license for hunting rifles, the required export license for trophy/CITES certificate, and food and lodging while on the hunt. Not included is airfare to/from Moscow, roundtrip plane trip to Abakan, Russia, hotel stays before the hunt, visas, overweight baggage, and gratuities. 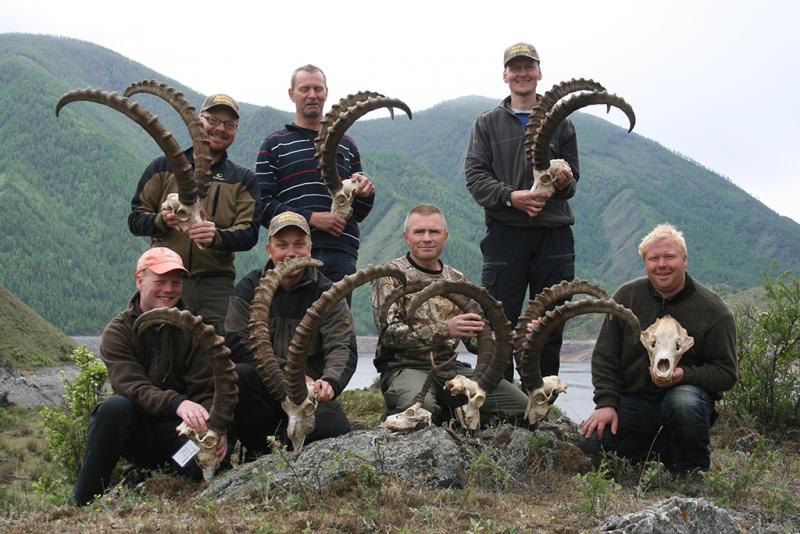 Please note: Due to different airline schedules and eventual changes by the tour operators, we reserve the right to change part of the hunting tour.